This website uses 🍪s. If that's okay with you, keep on browsing.

Going…going…gone. For some time Google has been warning its search ad platform users that they would be removing one of the four keyword match type options: broad match modifier. And it’s finally happened. At the end of the second quarter of 2021, the broad match modified keyword type was removed from the Google Ad system. Three match types remain: broad match, phrase match, and exact match.

But here’s what we see. 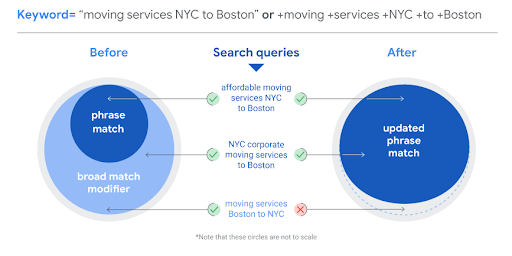 This graphic is Google’s own example. We see that phrase match now incorporates more types of keywords than before. As this change went live I began running my own tests to see how the new “enhanced” phrase match system would perform and whether the number of search terms phrase match keywords allowed ads to appear on, would be more similar to broad match modifier.

Below is a series of results for the phrase match keyword “form builder”.

There are a number of search terms that traditionally would never have allowed an ad to fire an impression under the old phrase match type. These include: 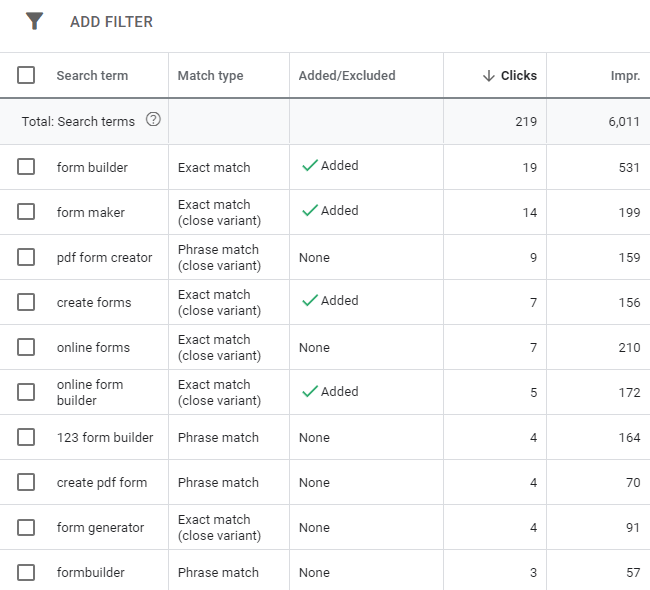 Now, however, we see that the new phrase match has looser settings and parameters to show an ad and is definitely closer in functionality to the old broad match modified match type.

This has obvious implications for how accounts need to be constructed to accommodate this change and are summarized in the below recommendations:

Interested in what we at Wallop think of this change? To start, it’s not an advertiser-friendly decision on Google’s part. The removal of this functionality does not improve an advertiser’s ability to accurately target their desired audience and pushes an advertiser to use less efficient keyword match types. Sadly, this continues the trend of useful features and functionality being removed from the platform—recent examples include their removal of the average position metric, “deprioritization” of click-to-call formats and discontinuation of expanded text ads.

The broad narrative we see across the primary ad market platforms, such as Google and Facebook, is a push to make traffic more profitable across the board, rather than the platforms getting their revenue from fewer specific keywords and audiences. Examples of this push are:

While we’re not thrilled about the ad network’s recent changes, worry not. All is most definitely not lost. Google search campaigns remain some of the best media for driving bookings and sales in this industry. More importantly, it’s where we at Wallop tend to drive the strongest return for our clients.

Get in touch if you’d like to discuss advertising strategy with our team.

Our approach to marketing starts with understanding the people behind the process In the digital marketing world, it’s easy to get…

Our Most Recommended Hospitality Tech

Wallop turns 18 this year, and as we hit this milestone birthday we can safely say that another year older is definitely another…

Read More about the Our Most Recommended Hospitality Tech post